Hearts that has to hear that your family members who are police officers that are to serve and protect is either serving and protecting or maliciously taking the life of someone else. Confusion is stirred up and fear becomes the force of retaliation. The hands that are dripping blood are crying out for help. Who will pull them to safety?  Who will continue to close their eyes to what is going on around them? Who will stand up and say this is enough and change the current situation?

Look past the color of the skin and listen to the cries of the heart. The people children once looked up to are scared to see them driving by them. In their minds they relate police officers with death not protection. When we younger all the kids in the neighborhood played cops and robbers because in our mind only bad people were supposed to be caught. Everyone wanted the role as the cop but now I do not even think any kid would want to do that especially with what the media is portraying.

I had a conversation with a seven year old who said he wanted to be a cop when he grows up because he can kill whoever he want no matter what they do. I asked him why would he say something like that and his reply was “because they do not deserve to live.” What are we teaching our children? What are we showing our children? How do you explain to a seven year old that is the wrong mindset and that is not the role of a police officer? It is time for us to speak out and let our children know that no one deserves to be treated wrongly. However it is also time for us to speak out and let everyone know that everyone police officer is not out to harm the people. Every police officer is not racist! Every white person is not a bad person! Every black person isn’t lazy and a criminal! Every Muslim is not a terrorist! Every Mexican is not an illegal immigrant! Speak out and teach your children now so they will not grow up to have an one-sided thought process. Stop the racial profiling if you expect the world to get along with each other.

Can you hear what your silence is doing to this world??? 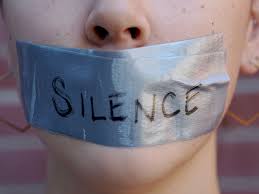