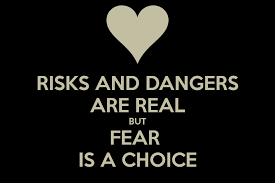 “There are two kinds of fears: rational and irrational- or in simpler terms, fears that make sense and fears that don’t.”
― Lemony Snicket

Rational: based on reason or logic

Irrational: not logical or reasonable

Fear can get the best of us…. 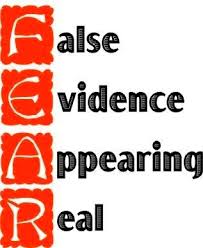 I could go on and on with the “what causes” questions but all the answers would be the same and the answer would be “fear.”  FEAR (False Evidence Appearing Real)! Late summer and early fall somehow someway centipedes always find their way into my bathroom in the middle of the night. The night light is on and of course at 2 or 3 am your eyes can play tricks on you. However, my eyes always seems to zoom in on the spider with millions of legs looking at me. First reaction is panic and then it’s fight or flight. My option is always flight and I pray I don’t have to use the bathroom again before anyone else gets up in the morning so they can kill it first. (When I look back it really is amusing)

So I ask myself was that rational fear or irrational fear. HMMMMMM in my mind it is rational fear because in my eyes it’s a killer bug that is going to take me out. But in retrospect my fears are irrational because the bug is running just as fast as I am in the other direction. So we both are scared for our lives and do not know why!!!

Fear is a powerful thing if your allow it overtake you in the wrong way. Irrational fear will cause you to make decisions that you would not make had you been in your right mind. Now do not get me wrong what I may think is irrational someone else may think it is rational in their mind and vice versa. When I was maybe 23 or 24 my best friend from high school died at the age of 25. With me not understanding completely what was going on in her body and the medical conditions she had I ceased living because I had fear that I would not make it to 25 either. I was careful and cautious of every move I made and was just waiting for my life to end the same way. My mother died of breast cancer at 48 so again this was a moment of rational fear in my mind that I was going to die the same way so every lump from the age of 30 was a death sentence for me in my mind. I confined myself to one place in my mind because I could not rise above the fear of death.

Another moment of rational fear was when I was in the bank down the street from where I worked with some of my co-workers. I was standing in the teller line and I saw a man outside of the window show me his gun. I told my co-worker and the person in the bank and security was sent out there but he disappeared only to appear again when we were walking across the street to get lunch. Due to the some quick thinking and lots of praying we lost him because he followed us into the restaurant but we quickly darted out of the opposite door. I could have hid and never went outside again or into that bank but that is not how life works so I had to overcome that fear and keep on living.

It is time to face your fears and rise about everything that is keeping you from moving forward!!!